Scrub clearance should by no means aim to remove all scrub from Painswick Beacon; rather to remove recent encroachment to restore and retain lowland calcareous grassland and to maintain the historic ‘openness’ for landscape and recreational access purposes. Scrub clearance should aim to create and maintain a mosaic of scrub (of diverse age and species structure) interspersed with open grassland of varying sward heights; the grade between scrub and open grassland is of importance for many invertebrates, and the ‘edge’ habitat is important for birds and foraging bats. In a grazed system, scrub can be beneficial in maintaining longer, tussocky areas as animals will avoid grazing right up to the edge.

Thus the overall aim is to reduce the cover of scrub on the Beacon to around 15 to 20% on average, with locally higher and lower proportions; these local proportions are important because some areas of the Beacon, such as the golf course, the hill fort and areas of particularly species-rich grassland are managed with very minimal scrub and short swards.

Note that this scrub plan does not cover the Scheduled Area of the hill fort; scrub clearance on this area is to be completed under the Historic and Archaeological Plan (HAP).

Before starting, ensure that all undertaking the work have read Sections 6.1, 6.2 and 6.3 of this report.

Before commencing any work, make sure you have identified the boundaries of the area in question using the scrub management maps and the descriptions below. Walk the area a couple of times to get a feel for the distribution of scrub encroachment, and its age, species and density/structure. Also read the descriptions below so that you are aware of the target species and any specific scrub to retain or remove. Formulate a mental (or even sketched) plan of where you will clear before commencing to ensure that the target percentage clearance is met but not exceeded.

Where shoots are sufficiently immature or where species are multi-stemmed (such as bramble), scrub can be cleared with a flail mower (if site access allows) or a brush cutter. Larger or more mature scrub, notably ash, should be sawn off as close to ground level as possible to avoid protruding stumps. Stumps should be treated with Glyphosate to prevent re-growth. In many areas pine saplings are a big problem. Where these are small enough to uproot they should be pulled out; otherwise they should be cut and treated with Glyphosate, as above. Note the uprooting is not possible on the scheduled area of the hill fort as it may damage the archaeology.

Cuttings should be collected and burned on site on an agreed burn pile location (see Appendix Eight). Where haulage back to a burn pile is not possible (for example larger material), wood can be piled up on low-value, secondary woodland edges. Arrange lengths of wood in an irregular fashion when constructing these piles, in order to maximise their value for wildlife.

Some species such as hemp agrimony (Eupatorium cannabinum), rosebay willowherb (Chamerion angustifolium) and winter heliotrope (Petasites fragrans) have a propensity to be rather invasive on the Beacon. Recently cleared areas with bare ground are vulnerable to invasion by these species, along with thistles such as creeping thistle (Cirsium arvense).

Colonisation by these species MUST be dealt with before the problem spreads. It is the responsibility of the person or group who clears an area to monitor the area in subsequent seasons for the appearance of these species. Should they be noted, Natural England should be informed and the agreed course of action should be followed. Likely remedial action will be to cut when the plants are in bud/early flower but before they begin to go to seed, with the exception of winter heliotrope, which will most likely require treatment with Glyphosate in February/March.

A felling licence from the Forestry Commission is required to fell trees. It is an offence to fell trees without a licence if an exemption does not apply.

The exemptions which are most likely to apply in this situation are the ‘volume and diameter’ exemptions. Under these exemptions, you do not need a licence:

-for trees that have the following diameters when measured 1.3 metres from the ground

o 10 cm or less for thinnings

The individual committing the offence would be liable to prosecution; to protect yourself it is always best to check with the Forestry Commission that the work you are going to undertake is exempt.

For more information, contact the Forestry Commission West on 01594 833057 or visit http://www.forestry.gov.uk/forestry/INFD-6DFK86 .

Some species, such as nesting birds (and their nests and their eggs) and bats, are protected by law from killing, injury, taking or disturbance. This can include their place of rest (i.e. nest or roost), even if the animal is not present. As above, it is the individual committing the offence who is liable to prosecution.

Scrub clearance work should always take place outside of the bird nesting season (March to August inclusive), and it is recommended that scrub clearance does not commence until mid-September. At this time it should be undertaken with caution, checking for ‘to-ing and fro-ing’ of birds. Any suspected nest should be left in situ, along with at least a five metre radius around it. The scrub can then be cleared later on when the birds have left.

The majority of scrub work recommended here is of young saplings or semi-mature trees. The likelihood of disturbing or destroying a bat roost is thus minimal; however as a precaution, any tree which has rot-holes, dead wood, slits or cavities or dense ivy cover should not be removed.

Painswick Beacon has both mature and young juniper (Juniperus communis) plants. These are of significant conservation interest. This species has a ‘slow but steady’ lifecycle: it is slow-growing with a low rate of recruitment; offset by a long lifetime (a single individual can live for over 100 years). The species thus does not have a mechanism for ‘rapid response’ and any management must be undertaken extremely carefully and in some cases gradually to avoid shocking the plants with a rapid change in humidity or exposure.

The strategy adopted through this scrub plan is to rescue existing junipers which are threatened by scrub encroachment. In some cases the adult juniper plants have been forced into a ‘lop-sided’ growth form by encroaching scrub, and in others they have been starved of light by surrounding trees and are likely to be much less robust than if they had grown in full sunlight. In both of these cases it is rather risky to completely remove the scrub around the juniper, even if gradually, as the plants will then be vulnerable to being brought down in the wind. The strategy for these plants which cannot be entirely rescued is thus to extend their lifespan as much as possible by enabling them to co-exist with the surrounding scrub (which, although has affected the juniper’s growth, may now be acting as a wind-break to protect it). This will prolong their ‘usefulness’ on the Beacon as a source of recruitment.

This rescue strategy forms part of a two-pronged attack; the ‘cutting and other works’ plan in Section 7 below aims to create conditions to encourage recruitment of new juniper plants.

There are 56 known juniper plants on the Beacon, including seedlings at several locations (two of these 56 are thought to be dead). The locations of the juniper plants are marked in the Scrub Management Maps provided in Appendix Nine. These were mapped to an accuracy of (at least) 10 metres using a hand-held GPS unit following Cedric Neilson’s and latterly Mark & Clare Kitchen’s and Juliet Bailey’s juniper survey (in The Gloucestershire Naturalist No. 15). This is not an exhaustive map -the juniper is regenerating naturally, so more plants may appear, and there may be additional junipers which have not yet been located; thus it is important to remain vigilant for un-mapped junipers.

Juniper is a prickly shrub which has spiny leaves borne in whorls (circles about the stem) of three. Each individual leaf tends to have a longitudinal white strip down the middle. These are known as ‘stomatal stripes’. Shrubs can have a low-growing, sprawling habit or they can be upright and tall; exceptionally as high at 7 metres. It is a dioecious species, with separate male and female plants, so the plants will not necessarily have berries. When berries are present they are green ripening to
blue-ish black.

On Painswick, juniper could superficially be confused with pine or yew seedlings. Pine has much longer needles which are a uniform, pale green with a distinctive pine smell. Pine needles are attached to the stem in pairs, as opposed to being in whorls of threes. Yew is not spiky to touch and has red berries.

The pine on the Beacon is very invasive and the aim is to remove as much of it as possible; however if there is any doubt as to whether a sapling is a pine or a juniper then do not remove the plant – let it mature so that it is more easily identified. 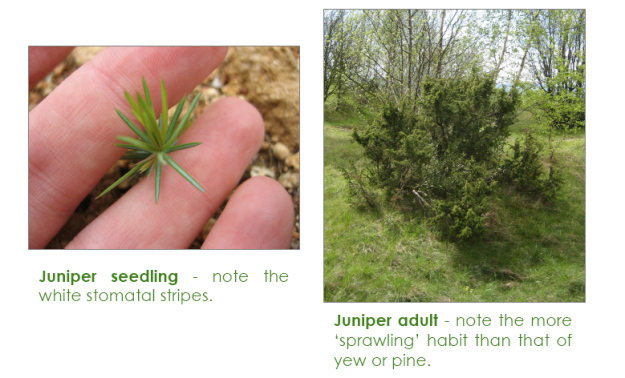 -Juniper must never be removed as part of scrub clearance work.

-Juniper must never be trimmed or have branches removed, as this can leave the plant vulnerable to rot or disease.

-Never use herbicides in the immediate vicinity of a juniper unless otherwise stated below (to eliminate the risk of accidental spillage onto the plants).

-Never cut scrub or trees from immediately around or in amongst a juniper unless it is specifically described in the following sections. As noted above, this work may have to be undertaken in phases, monitoring its impact along the way.

Phytophthora is a genus of fungus-like plant pathogens. Phytophthora is best-known in the UK for its effect on larch; however P. austrocedrae has been found to have infected junipers in northern England in recent months. This species is also known to infect cedars and cypress.

Any symptoms of disease on the juniper such as die­back or other unusual characteristics should be promptly reported to Natural England and to Fera Plant Health & Seeds Inspectorate (Tel 01904 465 625 or email planthealth.info@fera.gsi.gov.uk)